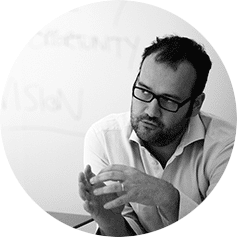 Federico Parolotto is Senior Partner at MIC – Mobility in Chain, which he co-founded with Davide Boazzi and Federico Cassani in 2009. He began his career with SOM in the UK (1994–98) and worked with Systematica in Milan (1998–2008) where he was made partner in 2006.

He has been involved as transport planner in numerous major urban planning projects worldwide. He collaborated with Foster + Partners on the new „zero-carbon city“ of Masdar, planned in Abu Dhabi, and on the winning entry in an international design competition for a new city near Seoul, South Korea. He has worked with OMA, UNstudio, KPF and other renowned studios on several groundbreaking projects.

He was a speaker in numerous international events including the Greenbuild conference (Boston), Ecological Urbanism (Harvard University, Cambridge) in 2009; Helsinki Design Lab in 2010; Superurbano Conference in Padova in 2011; Moscow Biennale in Moscow; SPIEF in Saint Petersburg; World City Forum in Naples and Connect Ideas Maximize Impact In Stuttgart in 2012.

In 2011 he co-founded Flow(n)- www.flow-n.eu – MIC research unit. He lectured in several international universities and, among various publications, his essays were published in 2011 on “Ecological Urbanism” by Mohsen Mostafavi and Gareth Doherty  and in 2012 on “Ecological Urban Architecture: Qualitative Approaches to sustainability” by Thomas Schroepfer.

Federico since 2012 is a member of the scientific committee for the new Milan Sustainable Transport Master Plan.