The Bio Ceramic System is a studio experiment which was developed at IAAC by Iker Luna, under Luis Fraguada, inside the Open Thesis Fabrication programme, in the research line of Smart Union Elements. The project aims at exploring the bio receptivity of ceramics taking advantage of the porosity of the material that allows it to retain water and using natural fibres as complement elements to benefit other properties.

It is known that species, such as moss, and other organisms have the capacity to grow in diverse typologies of surfaces, in particular surfaces with high levels of moisture and acceptable PH levels. Ceramics, such as roof tiles, become suitable places for the reproduction of this organism, providing even more benefit to the material performance in terms of the thermal and acoustic parameter, not to mention, photosynthetic organisms help to improve air quality and to alleviate urban heat island effects.

For the project, it’s important to understand that materials suffer different physical changes depending on the environment they’re in and also the climate conditions. Moss and other plants can also be responsible for increasing moisture levels and with temperature rise, water can significantly damage a normal ceramic piece.

The first phase of research was dedicated to a comprehensive framework on previous work in ceramic fields, taking into account components to test different levels of porosity and roughness. By nature of its microstructure, the traditional ceramic material can function as a buffer for both heat and moisture. The use of bentonite white clay was chosen as it has been proven that the material offers an equilibrium moisture content of 13% under 50% standard humidity conditions, whereas the equilibrium moisture content of kaolinite under the same conditions is only 0.7%.

Introducing porosity into any material will improve the thermal insulating characteristics (decreasing the conductivity) of the material. Porous materials consist of a solid matrix containing gas within the pores. Their good insulation properties are achieved due to the reduced thermal conductivity in gases, in comparison with solids or liquids. Pine sawdust was therefore incorporated in different proportions, as well as chamotte to produce a rough finish to help the growing process. Botanically speaking, mosses are non-vascular plants in the land of plant division Bryophyta. They are small (normally no more than a few centimetres tall) herbaceous (non-wooden) plans that absorb water and nutrients mainly through their leaves and harvest sunlight to create food through a process of photosynthesis. They differ from vascular plants in their lack of water-bearing xylem tracheids or vessels. As in liverworts and hornworts, the haploid gametophyte generation is the dominant phase of the lifecycle. This contrasts with the pattern in all vascular plants (seed plants and pteridophytes), where the diploid sporophyte generation is dominant. Mosses reproduce using spores, not seeds and have no flowers.

Since moss gametophytes have no vascular system to transport water through the plant or waterproofing systems to prevent tissue water from evaporating, they must have a damp environment in which to grow, and a surrounding of liquid water to reproduce. They also require enough sunlight to conduct photosynthesis being autotrophic. Shade tolerance varies by species, as it does with taller plants. In most areas, mosses grow chiefly in damp, shady areas, such as wooded areas and at the edges of streams, but they can grow anywhere in cool, damp, cloudy climates. Some species are also adapted to sunny, seasonally dry areas like alpine rocks or stabilised sand dunes. Since a mosses lifecycle can take a couple of months to stabilise, the method chosen was mixing different components together in order to accelerate the growth. 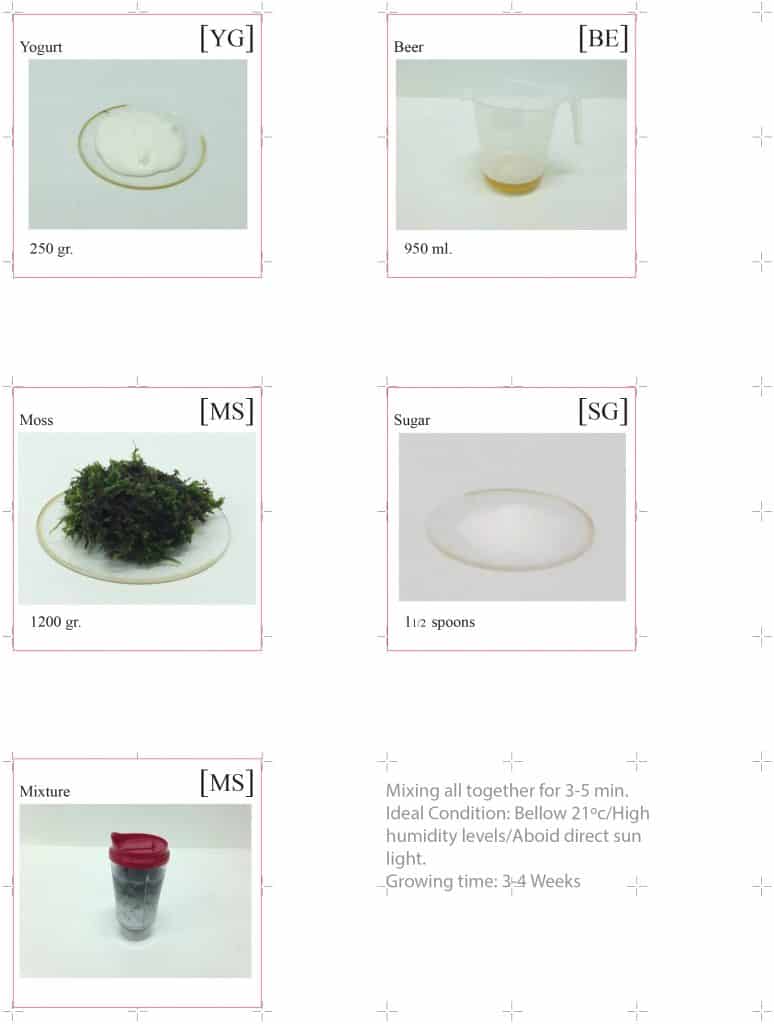 In order to analyse the bio receptibility of the BCS, the NIR and NDVI technology was used to see and to detect first evidence of living moss in the ceramics. This allows observing which samples are more suitable for growing the photosynthetic organism in controlled conditions. This process was developed using a modified digital camera, in this case, the Canon A810, by replacing the original filter from the lens and added a specific blue filter (1). This new filter captures near-infrared and blue light in the same image, but in different colour channels. Images are processed with a code (2) designed in Studio R, a language designed for processing images and Quantum Gis, an open source geographic information system.

Once the multispectral photograph of the materials is taken, it is possible to post-process the images, compositing the infrared and visible data to generate new images which display the healthy moss, photosynthetically active areas as bright regions. In this case, QGIS1 was used to analyse regions, but a grasshopper definition was also generated to explore new potential data. Near-infrared photography has been a key tool for planning at the industrial and governmental level: It is used on aeroplanes and satellites by vineyards, large farms, and even NASA for sophisticated agricultural and ecological assessment. 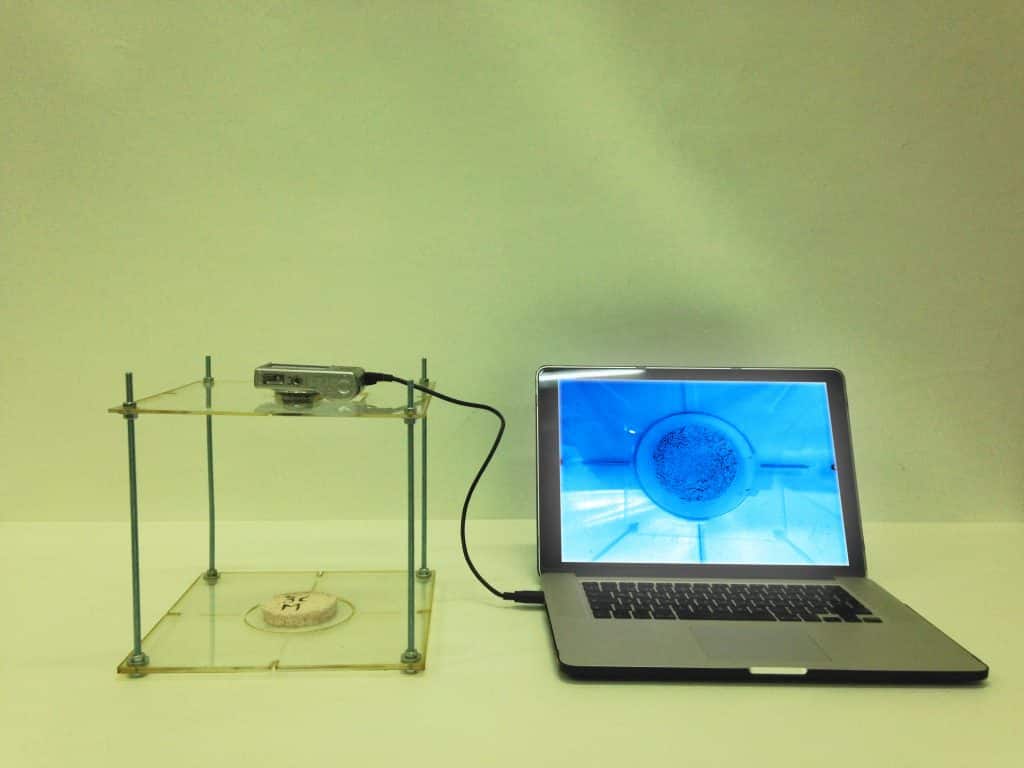 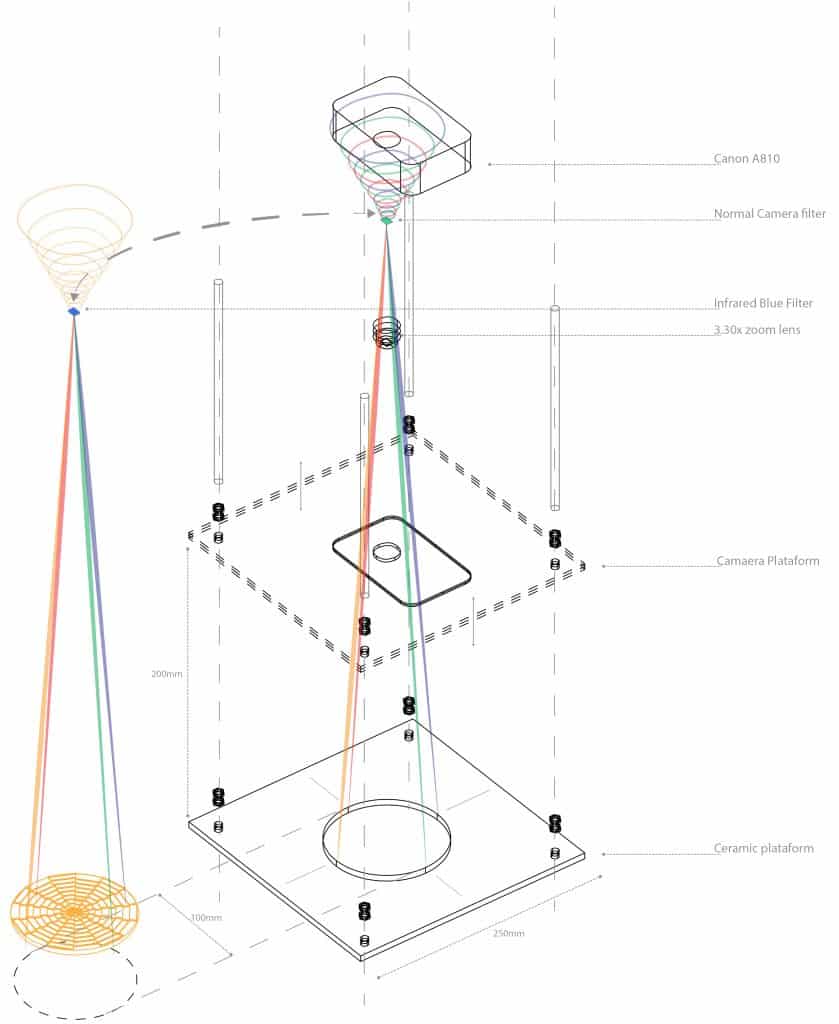 As a first conceptual prototype, the design is based on two layers of ceramics with different properties. The first layer is responsible for containing the organisms; in this sense, this layer must have high levels of moisture but also a textured geometry that can help structurally to avoid possible cracks. Besides these characteristics, this layer also contains Rockwool. The second layer is a less porous ceramic combined with enamel or vanis. This layer is designed in order to retain water and responsible for incrementing the rigidity of the system. To produce these pieces it is important to analyse the percentage of contraction due to water loss, before and after cooking. The observations through the practice of this method show that normalised difference vegetation index can change as a consequence of different factors, as in the final image result. For this reason, the protocol was improved in order to get a better image quality. One of the factors that can modify the image and the values is the direction and the amount of direct sunlight, for this reason, the pictures were taken between 12:00 and 14:00, as well as in good weather conditions. To verify these values and to compare this index a black background, a green colour (to prove if this colour is not producing NDVI) and a healthy sample of moss were also analysed with the same method. 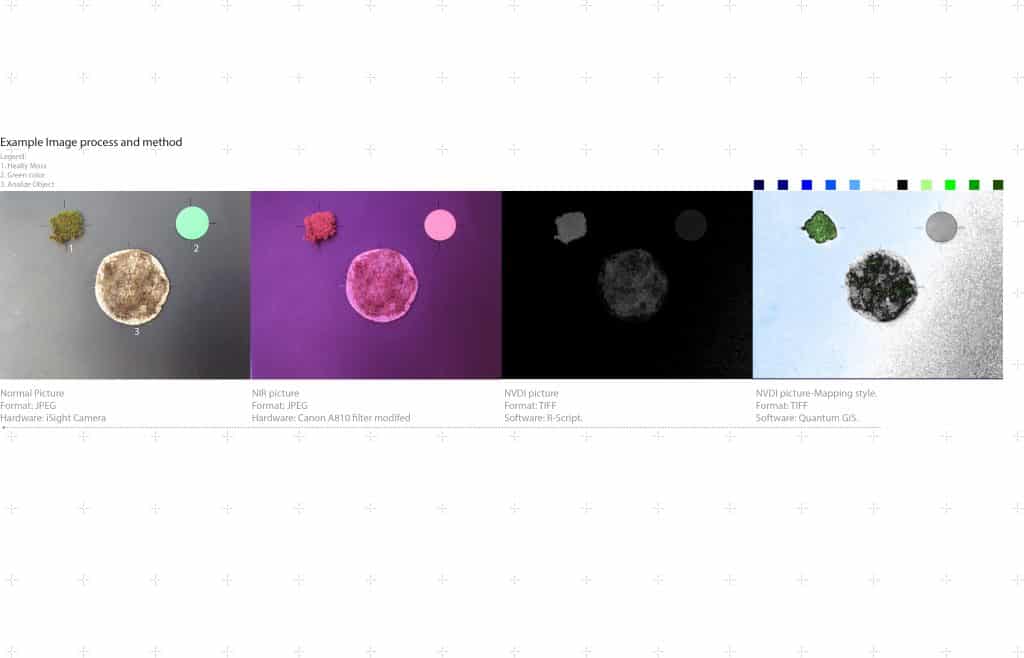 Reyner Banham states that “Of all the factors involved in environmental management, humidity has, for most of architectural history, been the most pestiferous, subtle, and elusive of control”. By Nature of its microstructure, a traditional ceramic material can function as a buffer for both heat and moisture. The intention of the project with this second group of prototypes was to control moisture levels with different porosity levels. The conclusion of the observation of the NVDI pictures was that photosynthetic organism grows progressively in ceramic of G3, unlike G2 and G1 where water absorption is higher, but also dries faster. To measure and understand the moisture levels better the ceramic formula used was from piece 3CL from group 3, not only because it seems to be one of the best samples with better receptibility but also because Chamotte C and Rockwool creates low levels of frangibility compared to the rest. 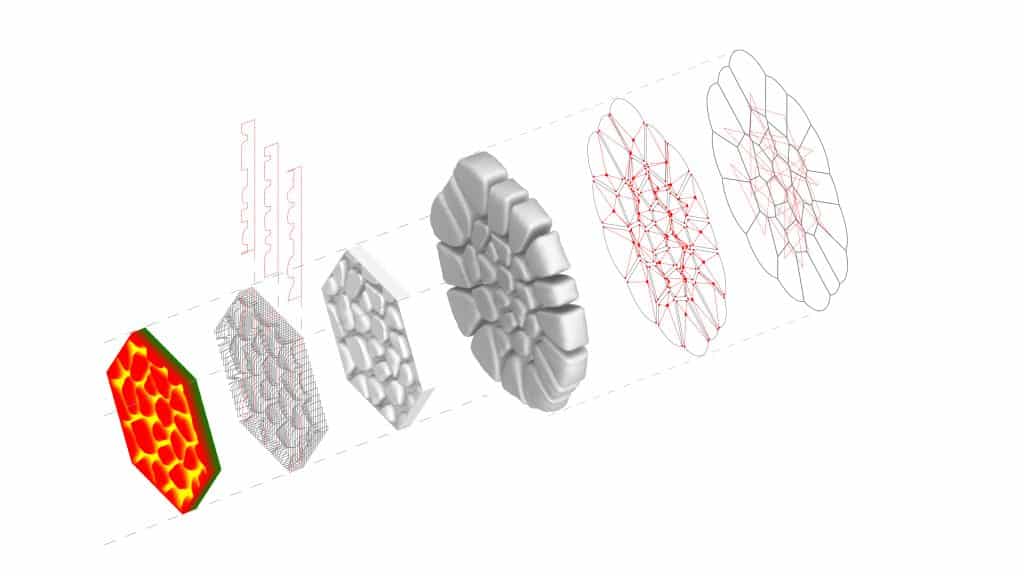 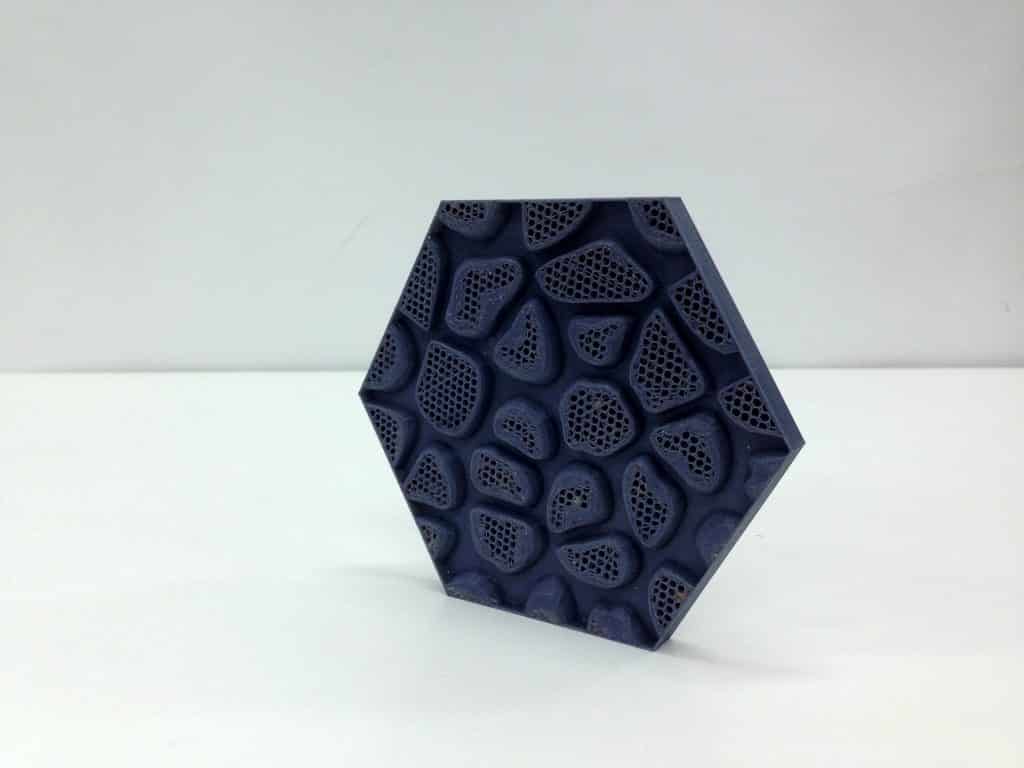 In order to prove and compare the difference in terms of porosity, a multiple moisture sensor using an Arduino MEGA controller is being developed, capable of reading data from ten different regions inside of the clay. This measurement will help to better understand the capacity of water retention and time absorption. Code and projection data was designed in MATLAB. While the moss is providing high levels of humidity because the capacity to keep water to survive this will generate a passive heat buffer, where the water will be retained by the three layers in the clay, making a natural exchange cycle from the moss to the medium and vice versa. At the same time, these levels of density can be tested as both sound and temperature buffers.