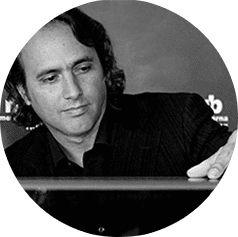 Willy Müller graduated as an architect (1984) in Argentina and pursued doctoral studies at ETSAB-UPB (1986/88). He is a co-founder of the Institute for Advanced Architecture of Catalonia (IAAC) in 2001, becoming its Development Manager in 2004. He established his own office in Barcelona WMA, Willy Müller Architects in 1996, a recognized architectural firm achieving several international awards in competitions as well as with built projects, featuring his work in numerous exhibitions.

He is the co-author of several books, including Sociópolis, Media House Project, the Metapolis Dictionary of Advanced Architecture, and the Self-sufficient Housing. “Müller himself is a professional of proposals, not only for buildings but also, as concepts.