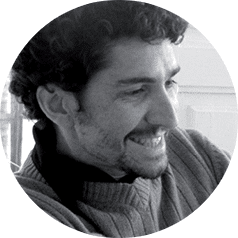 Rodrigo Rubio Cuadrado is a technical architect awarded by the ETSE in 2000, Architect by the ETSAM in 2007 best curriculum honours, MAA by IAAC in 2008, PhD candidate by the ETSAM since 2010.

Founder of MargenLAB Architecture (Madrid 2004), originally as a publication (Margen Freshpocketarq) and nowadays as a firm, exploring different professional boundaries in the intersection between ecology, information technologies and architecture.

Their approach to the architectural realm is decidedly multi-scalar, working in fields such us territorial planning, product design, landscape architecture and digital fabrication.

Since 2008, he has been exhibiting and lecturing in several national and international forums like the Cincinnati ACADIA Conference (2015), the New York Innovation Summit (2013), the 2012 Oslo Triennial (2013), the 12th Venice Biennale People Meets Architecture commissioned by Kazuyo Sejima and the  13th Venice Biennale Common Ground commissioned by David Chipperfield.

He has been teaching studios and seminars in several architecture schools such as ETSAM (Madrid), UEM (Madrid) and EPSA (Alicante).

He has been teaching at IAAC since 2008 on issues related to energy, urban habitat and self-sufficiency and directing research projects like the Fab Condenser (2014), Endesa Pavilion (2011), Fab Lab House (2010) and Hyperhabitat (2008).

He is currently developing the Cincinnati’s ACADIA WoodPrint research pavilion.