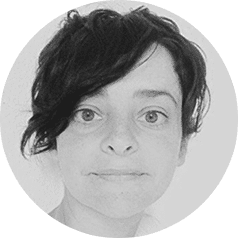 Mireia Luzárraga is the Head Architect of elBulliFoundation in Cloud9, and co-founder of takk-architecture with Alejandro Muiño.

She graduated with honours at ETSAM (UPM) in 2007 with a Masters Degree in Bio-digital Architecture, and she is currently doing a PhD in the ESARQ-UIC, where she also teaches. Takk’s first work, the walls are coming down, was awarded the opinion FAD price of ephemeral interventions.

They won the First Price for the Paradís project at Temps de Flors in Girona, honourable mention for Suitcase House at the Social Architecture Award of Konecta Foundation, and were invited to the OpenLab platform at the Spanish Pavilion of the XIII Venice Biennale. Their work has been recognized at national and international forums as Europan, Pasajes-iguzzini, and their projects have been published in magazines as Arquine, D+A, On Diseño or Pasajes and exposed at CCCB, ARCO, MACBA and FAD.

Takk focuses its aims on exploring the processes of architectonical subjectivation from the ideas of authors as Fourier, Klossowski or Debord, the renovation of the aesthetic experience of Rancière, or the magic of Tranströmer as a technique that allows the daily practices to lead the construction of politically active societies.