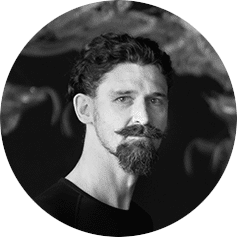 Marco, co-founder and director of ecoLogicStudio, is an architect, author and educator. After graduating with Honors from Turin Polytechnic in Italy, Marco moved to London to study at the Architectural Association. He would then spend more than 10 years at the AA, as a student, teaching assistant and finally as Unit Master. He also directed AA international workshops in Istanbul and Turin before founding one of the first ever AA Visiting Schools, in Milano in 2010.

Marco co-found the ecoLogicStudio in 2005 in London with Prof. Claudia Pasquero. Over these past 12 years and under the direction of Claudia and Marco the ecoLogicStudio has built an international reputation for its pioneering work on bio-digital design, with projects ranging from temporary installations to the territorial scale proposals.

Marco has been teaching and researching internationally; as Unit Master at the Architectural Association in London, as Senior Tutor at the IAAC in Barcelona, Visiting critic at Cornell University in Ithaca, Research LAB leader at the Bartlett School of Architecture in London, Distinguished Visiting Critic at Carnegie Mellon University in Pittsburgh and Visiting Lecturer at the University of Innsbruck. In the past two years Marco has been also Adapt-r research fellow at the Aarhus School of Architecture and is now PhD Candidate at the RMIT Melbourne. The PhD, due to be completed in November 2018, is titled “Urbansphere. Architecture in the age of ubiquitous computing”.

Marco has authored numerous papers and articles internationally and he is author of a book titled “Systemic Architecture – Operating manual for the self-organizing city” published by Routledge in 2012.