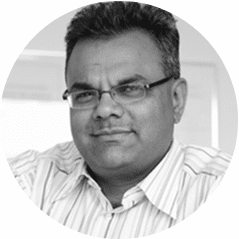 Professor Hanif Kara is a practising Structural Engineer, the Pierce Anderson Lecturer in Creative Engineering at Harvard School of Design and Visiting Professor for Architectural Technology at KTH Royal Institute of Technology in Stockholm, Sweden since 2008. His constructed work is recognised as being linked with the research and education areas of design. He has been teaching at various architectural schools in Britain, Europe and the USA since 1996. He co-tutored a Diploma Unit at the Architectural Association in London from 2000 to 2004, acted as a consultant for the Design Research Lab (DRL) for a number of years and was an external examiner from 2005 to 2008.

As Design Director and co-founder of AKTII (est 1996), his particular ‘design-led’ approach and interest in innovative form, material uses, prefabrication, sustainable construction, complex analysis methods have allowed him to work on award-winning, pioneering and unique projects. His career extends beyond the structural engineering disciplines and led to his appointment as a commissioner for CABE (Commission for Architecture and the Built Environment); the first engineer to hold this post for the government watchdog that monitors the quality of design throughout the United Kingdom.

In March of 2007 he was appointed as one of 15 members of the Design for London Advisory Group to the Mayor of London. Hanif was selected for the Master Jury for the 2004 cycle of the Aga Khan Award for Architecture and served as a project reviewer in 2007 and 2010. He was awarded an Honorary Fellowship of the Royal Institute of British Architects in 2007. Hanif will be the first Engineer to be a judge for the annual coveted RIBA Stirling Prize 2011. Hanif is also on the board or trustees of the Architecture Foundation and has been an advisor to the Aga Khan Development Network