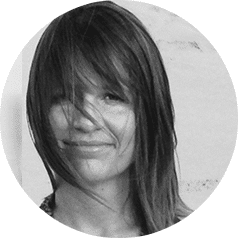 After graduating from the Turin Polytechnic in Italy, Claudia Pasquero moved to London to study at the Architectural Association.

In London, she worked as an architect for international offices such as Ushida Findlay Partnership and Erick van Egeraat Architects before co-founding the ecoLogicStudio in 2006. Claudia has completed a public library in Cirie’ (Turin) among other projects and she has been exhibiting ecoLogicStudio work at the Venice Architectural Biennale in 2006, in 2008 and 2010, where she has been presenting three different interacting prototypes, investigating the boundaries between architecture, science and tradition.

After the publication of the “The World Dubai Marine Life Incubators” in 2010; she is now co-authoring a book, dedicated to ecoLogicStudio’s research, edited by Routledge, titled “Systemic Architecture: operating manual for the self-organising city”.

Claudia is the director of ecoLogicStudio an architectural and urban design studio co-founded in London with Marco Poletto. In the past few years the studio has built up an international reputation for its innovative work on ‘systemic’ design; ecoLogicStudio’s method is defined by the combination and integration of systemic thinking, bio and socio-logic research, parametric design and prototyping.

Completed projects include a public library, private villas, large facades and eco-roofs; ecoLogicStudio has developed prototypes and installations for the most important Architectural Biennales, including Venice in 2008 and 2010 [STEMv3.0 the lagoon experiment, The ecological Footprint grotto], Seville [STEMcloud], Istanbul [Fibrous room] and Milan Fuorisalone [ Aqua Garden]. ecoLogicStudio runs international Workshops and cultural activities like the cyber-Gardening the City project in Milan, the Architectural Machines Symposium at the AA in 2009, the Fibrous Structures workshop, Prototyping the city in Turin, ICAMP in Messina and the Tropic Playground in Linz, to name a few.

The work of ecoLogicStudio has featured in many international architectural books and magazines like the New Arcadians: Emerging UK Architects by Lucy Bullivant; ecoLogicStudio has independently published booklets like the cyber-Gardens and the AA INTER10 09/10 book titled “World Dubai Marine Life Incubators”.

All the research work has been published in 2012 by Routledge is a new book titled “Systemic Architecture”.