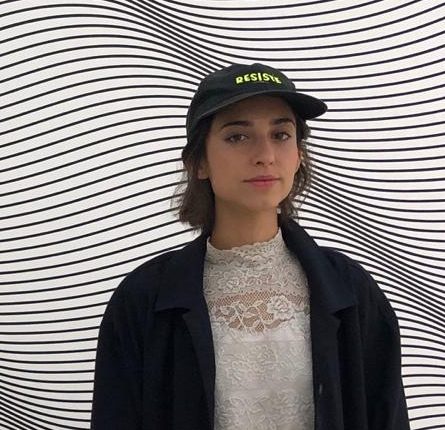 Agustina Palazzo is a multimedia artist born in Córdoba, Argentina. In 2010 she began her studies in Audiovisual Communication Bachelors where she started to experiment with visual language and sound, developing several video and research works. While attended the university, she founded the project “APOLO 91.7 FM” a
Cultural radio station that emphasises in alternative and emerging music, but which in turn claims radio language by experimenting with sound and radio art. In 2014, 2015 and 2016 Agustina works as a show producer in various music and emerging culture festivals such as “Emerging City Córdoba” and “Orange Dome, Cosquín Rock”.

After she finished her thesis on “Cultural radio projects” in 2015, she obtained the position of Director in “220 Contemporary Culture” which is until today one of the most important cultural centers of its native city. In 220 cc he specialised in the production of exhibitions as well as in the development and management of artistic / cultural projects.

In 2016 he participates with a group of artists with the exhibition “Relative” at the Genaro Perez Museum. In 2017 Agustina travels to Barcelona to specialise in new media and interactive technologies, applying to the Master in Advanced Interaction at IAAC, Institute of Advanced Advanced Architecture of Catalonia, where he graduated with academic merit with “Radiocosmosuit” project in “Augment senses Studio”.

Since 2018, she has participated artistically in exhibitions with projects, installations and works in festivals and art residences in different parts of the world such as Barcelona, Milan and Argentina, like Sonar + D, LLUM Barcelona, Theorema, Reshape and Tsonami.

In 2019, she started her collaboration with MUTEK.ES , festival of digital creativity as manager and coordinator of the DIGILAB program, linking the festival with universities and institutions in Barcelona. The same year, she worked as a production assistant in the interactive exhibition “MESSI CHALLENGE” of the famous Cirque du Soleil company. That same year, Agustina worked together with designers on one of the most important projects of his career, “Radiorator” presenting it in various venues and festivals.